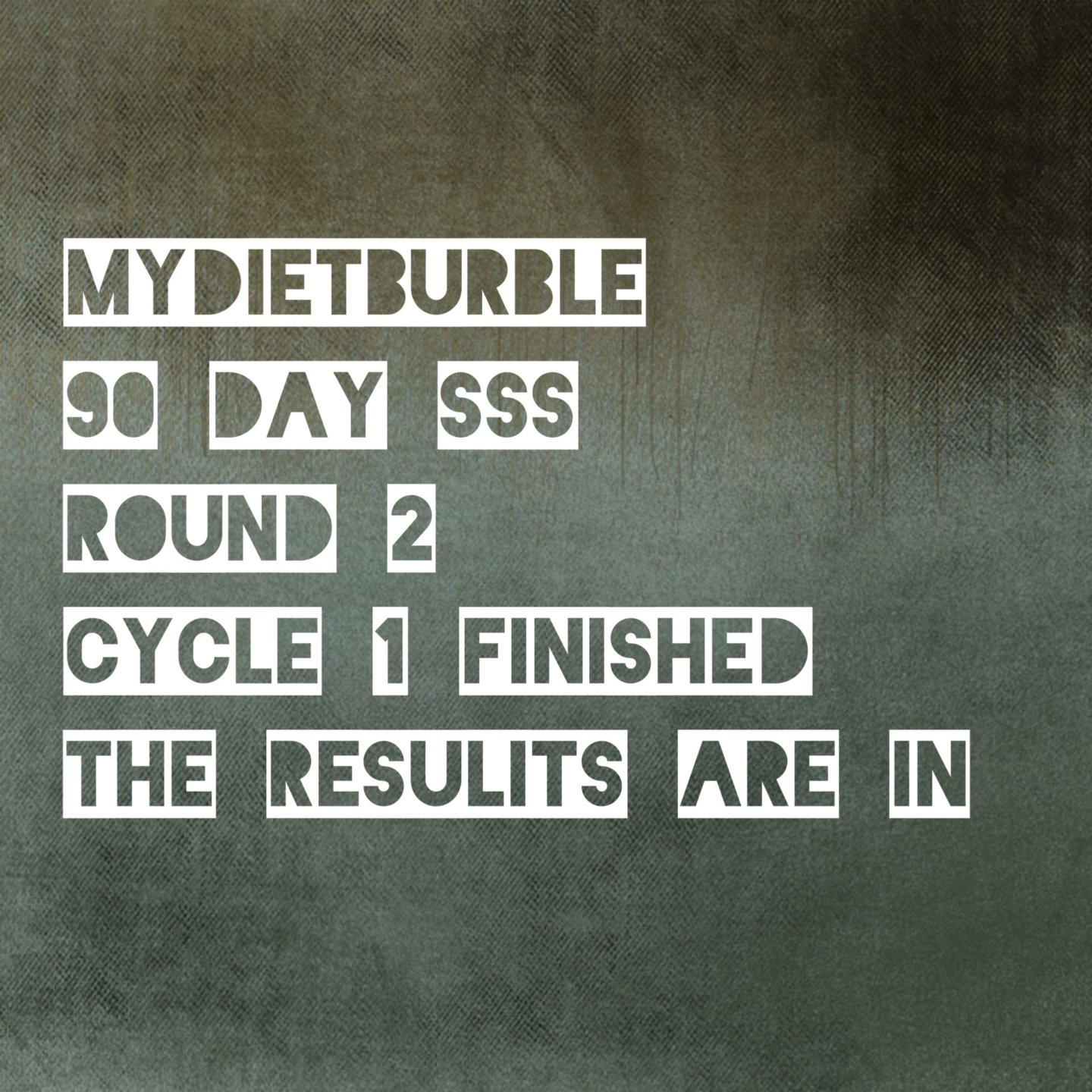 This is my second bite of the 90 Day SSS cherry.  After successfully completing my first round on 1st November 2016 having  lost 23.6 inches and 20.2 lbs I decided to sign back up and do it all again.  Before I finished Cycle 3 I consulted with my support hero and asked if she would continue to look after me, so as soon as I received my graduation report I sat down to complete the sign-up questionnaire all over again! Don’t get me wrong, I’m absolutely delighted with what I achieved, but I’m not where I want to be before I go it alone so I decided to do one more final round, I don’t plan to be on this merry-go-round forever.

I made no secret of my plan to do it all again.  I’ve been asked why sign up again when I could go it alone, and the plain and simple answer is that I wasn’t ready to do it on my own, especially at the time of year with the most temptations around.  I also didn’t want to sign-up to anything new and have to learn that, so for me this was the best decision to make.  In hindsight I probably could have done this on my own, but as graduation approaches for some reason you go into a blind panic.  If you belong to some of the 90 Day SSS support groups on Facebook you’ll see that it’s quite a common thing to do, panic I mean.

So has my opinion of the plan changed? No, this is still the best thing that I’ve done and I have to say that for anyone who has previous for failing at commercial diets like me and many others, then give this a go. It takes hard work but it’s worth it to see your fat levels going down, your clothes getting looser and the tape measure revealing smaller numbers as you get to the end of each cycle.  I’ll say it again, sign up to the 90 day SSS Plan, and it will take you on a journey of discovery.  I’m starting to find pleasure in wearing fitted clothes, and this morning Mr Burble mentioned that I had some muscle definition on my arms just above my now slowly shrinking bingo wings.

So this is what I did this time round:-

The Food – I still don’t like the set recipes in C1.  Hand on heart, the only recipes I’ve made this time were Joe’s Granola, Guilt Free Fry up and the Mushroom omelette.  It’s sooo restrictive when you love cooking as much as I do so I produced a pick and mix spreadsheet by macro calculating some of the set meals and adjusting my C3 pick and mix sheet.  During the first round I macro adjusted recipes in the Lean in 15 books, I think I also formed an unhealthy chorizo habit but I’m really pleased with the food choices I made this time. By producing a pick and mix sheet I was able to continue making recipes from my website mydietburble.com and I even came up with some new ones.  I don’t understand why Body Coach HQ doesn’t provide a pick and mix list in C1 as for me personally I would have given up during the first C1 if I hadn’t read about pick and mix in the next cycle.  Perhaps this will change in the future.

So this time we did things a little differently to keep the costs down as much as possible.  Breakfasts were either Joe’s Granola 3 times a week or a macro calculated smoothie.  We worked out the macros of the plan smoothie and adjusted the Chunky Monkey Smoothie from the blue Lean in 15 book to fit.  Lunches were mainly egg based with spinach with a couple of veggies added and dinners were chicken or mince based.  On reflection we had a lot of burgers with new potato chips.  But they were totally on target macros and quick to make. When you’re eating the amount of protein required on the plan, it gets quite expensive eating chicken several times a day, so mince made into a chilli, bolognese sauce or a burger was a little easier on the finances. Recipes for all of these lovely things can be found in the recipes section if you click here.

The Snacks – Again I wont lie, I didn’t regularly have 2 snacks each day just because I wasn’t hungry and didn’t want to start eating just for the sake of eating.  Most days I’d have at least 1 snack and if I did feel the need for a 2nd snack then it would be on a rest day so I’d have a little fruit after dinner.  If I did have a second snack it was either spiced nuts that I’d made or a Carb Killa bar, but if I’m honest I’ve gone off them a little. They seem too sweet and for me I have them as a last resort.  I was lucky enough to try some healthy snacks from Nutribomz that I was sent as a little freebie.  They were tasty and made a nice change from the snacks on the plan.  I really enjoyed the flapjack treats, nuts and fruit can get a little repetitive, and I really couldn’t be bothered to make the turkey bacon muffin things.  If I want bacon then I’ll eat proper bacon.  I was in touch with my support hero during the cycle and fully disclosed what I’d done in creating my pick and mix sheet, not for her approval but I wanted her to understand that the set recipes didn’t work for me and if enough of us say it perhaps things will change.

Hydration – At first I did get through the water required/suggested.  I limited myself to 2 cups of tea a day and 1 Nespresso made with 1% milk a few times a week.  But then part way through the cycle I lost the flow when it came to drinking the water.  When it’s really cold, the last thing you want to do is drink loads and spend time pacing to the loo and back.  My next genius plan was to have 2-3 glasses of water to 1 cup of tea but that didn’t last long either, so Mr Burble started to bring me a glass of ice cold water to me in the morning as I was getting dressed.  It does perk you up and I have really tried to drink more water especially on workout days and having the BCAA pre and post workout really did help get my water numbers up for the day!

The Workouts –  During my last round of 90 Day SSS I mentioned that I’d started on Joe’s YouTube videos but moved on to the  T25 program.  Each workout is 25 minutes and includes a warm-up, each session focuses on a different area and pushes you harder and harder and then moved on to a different exercise combo.  At the end of the 25 minutes a cool down session starts so in total you’re only at it for 28 or so minutes.  We did this for 5 days a week following a menu of workouts each week which ended on day 5 with 2, yes 2 back to back workouts which were a killer!  BUT I never missed a workout and gave it my all throughout.  We focussed on the beta cycle to which pushed me much harder than before and some of the workouts included resistance training as I was keen to maintain the muscle I’d built in the last round.  I finished the beta cycle on a high with my favourite workout, T25 Beta Speed 2.0 and at the end I was dripping with sweat and absolutely destroyed.  I really don’t recognise myself in terms of the workouts I’ve been doing.  I’m normally one of those people who will do ANYTHING instead of a workout.  But since signing up I’ve not missed a workout and I’ve really enjoyed the workouts.  I’ve noticed that they clear my head and when you’ve had a day with screaming twin toddlers a workout gives the the chance to workout the stresses of the day.  For anyone who isn’t getting on with hiit I would recommend this training program.  The workouts are engaging, you can modify when you need to and it feels like you’re part of an organised class at times.

Supplements – Again, I look every supplement recommended with the exception of the post workout protein drink.  As we worked out during the early evening, we were already consuming a lot of liquids with the pre and post BCAA and it was so close to dinner time too.  If you’re thinking of skipping them I’d ask you to reconsider.  I’ve been doing this now since July and the only time I’ve felt pain is when I didn’t do a cool down after the first of my day 5 T25 workouts.

Results – So in this 2nd Round of C1 I’ve lost 3.5 inches and another 4.5 lbs lost, making that 27.1 inches and 24.7 lbs lost since starting this in July 2016.  But the really interesting thing is that my fat mass has decreased by 5.8lbs so more than my weight, I’m really happy with that.  But the most significant change is one you can’t see.  OK I’ve not had a dramatic weightloss transformation, it took years to get in the state I was in before I started 90 Day SSS.  For me the biggest change has been to my self esteem. Wearing smaller sizes is a lovely bonus and I’m the smallest I’ve been in years, but I no longer feel self conscious in the changing rooms when we take the twins swimming and I now understand that I have to look after myself as much as I do my family.  I was guilty of always at the bottom of the list and never got a look in.  I’m still at the bottom of the list, but I now take a little time each day to think about what I’m putting into my mouth and exercising when I’m supposed to.  It’s going to benefit me and those around me greatly!

I’m so happy to be hitting C2 in December, it’s going to make the holiday season a little easier!