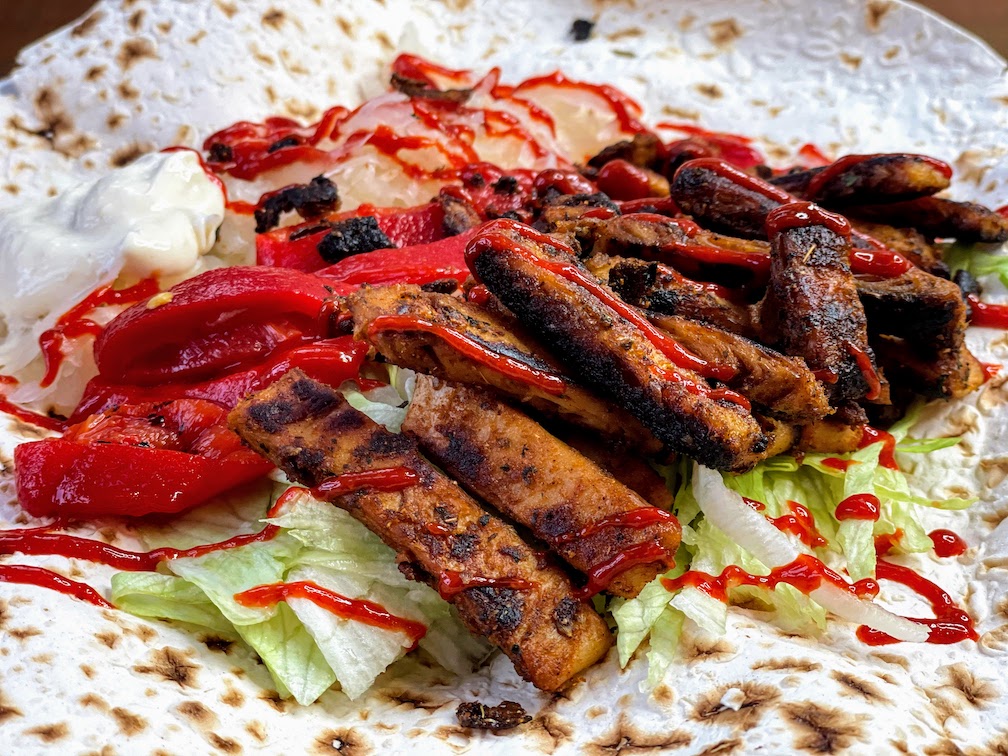 Today I am trying out and reviewing Oumph! Kebab Spiced Soya Protein.

I enjoy meat and I look to buy meat that’s been raised to the highest welfare standards that I can afford, and I also regularly enjoy meat free dishes.  Growing up chickpeas and lentils were regular stars at the dinner table, but eating less meat seems to be taking a rather strange turn and I’m not sure who is in the driving seat, the consumer or the food producers?

Many years ago being a Vegan meant eating vegetables, legumes, beans, nuts, seeds etc etc but I really don’t understand this trend of having ‘faux/fake’ meat.  I first noticed it a few years ago when we visited a Vegan food festival.  I was really looking forward to having my mind blown by some new food finds, but I was greeted by pizza covered in Vegan cheese (not nice), fake hot dogs (not nice), falafel filled pittas (the star of the show!).

It would seem that the market is driven by the ‘new Vegan’. Former meat eaters who have made the change to ditch animal products but still want to eat products that are familiar. Meat free at any cost?

The packaging will proudly tell you that Oumph! is made from Soya Beans. The packaging includes a sentence which I find odd ‘This is really good food’. It’s almost Derren Brown style power of suggestion. You’re then told how mouthwatering it is (I’ll touch upon this more later) and then of course its environmental credentials.

The final piece of marketing blurb which I find odd is a strapline below the serving suggestion ‘Strips of extruded soya protein with kebab spice, deep frozen’. I’m not sure that eating anything that has been extruded is necessary and sounds unappealing!

I first encountered this product when my children were in the latter months of pre-school. In these modern times (goodness I sound sooo old!), nursery/pre-schools and schools provide parents with a menu which outlines everything your child will be presented with during mealtimes.

Going back to 2019 the latest menu hit my inbox and I glanced my eye over the teatime options as these would be the only meals that they would be present for. It was good to see a variety of crown pleasers, and I was almost satisfied with the selection, but then the very last option, Friday on Week 4 was Wholemeal Pasta Salad with Oumph. I thought nothing of it at first.

Throughout the morning it kept playing on my mind. My initial reaction was it was pasta salad with a bit of a pep to it. I decided to Google it and once I was up to speed I emailed the pre-school and arranged a meeting with the manager. Long story long………I expressed my view that I didn’t want my children to be given this as a meal option. It’s not something we would eat as a family and if the intention was to provide the children with meatfree options that there were plenty of alternatives that they could serve that were not highly processed.

Back to my unbiased review!

The packaging promises so much. I see what looks to be tender strips of kebab fake meat, so when I see what’s actually inside the package, I’m further reminded of the fakeness of this product. Fairly uniform (extruded) strips of Oumph! which further highlights how highly processed these pieces are.

The instructions are very simple to follow and it gave me time to put the rest of my kebab together.

I kept my heat on a medium setting, but despite this some of the pieces were more caramelised than others. I think this is due to the grape sugar (there’s no sugar in meat btw) that forms part of the ingredients so it’s something to be aware of.

The amount of seasoning really punches you squarely between the eyes almost immediately. I’m not afraid to season my food, but because soya is such a blank canvas with its flavour profile, the manufacturer I feel has gone overboard in their effort to add flavour to the Oumph! pieces. While you couldn’t fool a meat eater with the texture of the pieces, it does have a palatable texture. The caramelisation on the outside provides a little crunch while the inside is soft and a little fibrous. Of all the seasonings added, black pepper is the dominant spice totally overpowering the other spices and herbs included on the ingredients list

Taste : 1 out of 5 – the point it got was awarded for the texture as it was over seasoned.

Value for money : 0 out of 5 – if I was served this when dining out I would have returned it to the kitchen.

Likelihood of buying it again : 0 out of 5 – I don’t see why if you want to enjoy a meat free meal that you have to eat something that is so highly processed and so far away from the original concept of Veganism.

Where To Buy It

You can find this product in most supermarkets. I purchased my bag from Asda Online.

Please note that this review is based on the product that I’ve purchased and the review reflects my own honest opinion.