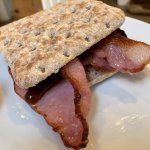 Bacon.  I love a bacon sandwich and how you like to eat your bacon is a really personal thing.  With Ketchup, with brown sauce, mustard or mayo, down to the bread even. For me it has to be bacon grilled until it’s a little crispy and a good helping of brown sauce.

Since the children’s arrival back in 2015 I have given much thought to what and how we eat and over the past 4 years our food habits have had a bit of a makeover.  Out went a lot of processed and convenience foods and in came more fresh fruit, vegetables and wholegrains.

While I don’t claim to lead a virtuous food existence I have learned to understand that you can enjoy most things as long as you moderate your consumption of them.  A treat is something to have and enjoy occasionally and because it’s not an everyday thing, you should be able to have that food item without any feelings of ‘this is bad’ or of guilt.

We’re normally busy at the weekends, so the thought of having a bacon sandwich one morning has been in the back of my mind for some time, but while trying to reduce the amount of processed meat we 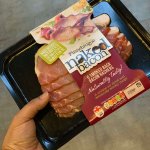 consume as a family (ham, salami, bacon, sausages) it’s a thought that’s been ignored, however when in the supermarket dashing to grab things before the children decided that supermarkets were “rubbish” I happened across Naked Bacon.

I do love bacon but I do find it quite salty and of course it fits in the category of ‘processed meat’ so it’s not something I buy very often, but after seeing that it was made without nitrites and other preservatives I decided to give it a go.

In the past when I have bought ‘regular’ bacon it can sit in the fridge for some time before I have to hurry up and eat it because of a ‘use by’ date, but because Naked Bacon isn’t highly processed, it’s ‘use by’ is shorter as it has less preservatives as it states quite clearly on its packaging.

On Sunday we had more time at home so on went the grill, I had some bread to use up and my bacon sandwich breakfast was GO!  Grilled bacon with a dash of HP and my breakfast dreams came true!  Bacon despite its high fat content can be quite dry, but Naked Bacon even after grilling had a lovely juicy quality about it.  It had a lovely smokey flavour as you would expect bacon to have but to my surprise it wasn’t anywhere near as salty as conventional dry cure bacon can be. 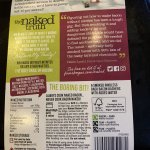 I purchased a 200g packet of smoked back bacon which included 6 rashers of bacon for £3.00 and it was enough for 2 small bacon sandwiches.   Compared to ‘regular’ dry cure smoked bacon bacon it was more expensive per kg but free of sodium nitrite.

Call this bacon with a conscious and even though the manufacturing process is different, it’s not a green light to eat this everyday.  Still high in saturated fat makes Naked Bacon something I’m happy to have occasionally.

Likelihood of buying it again : 5 out of 5