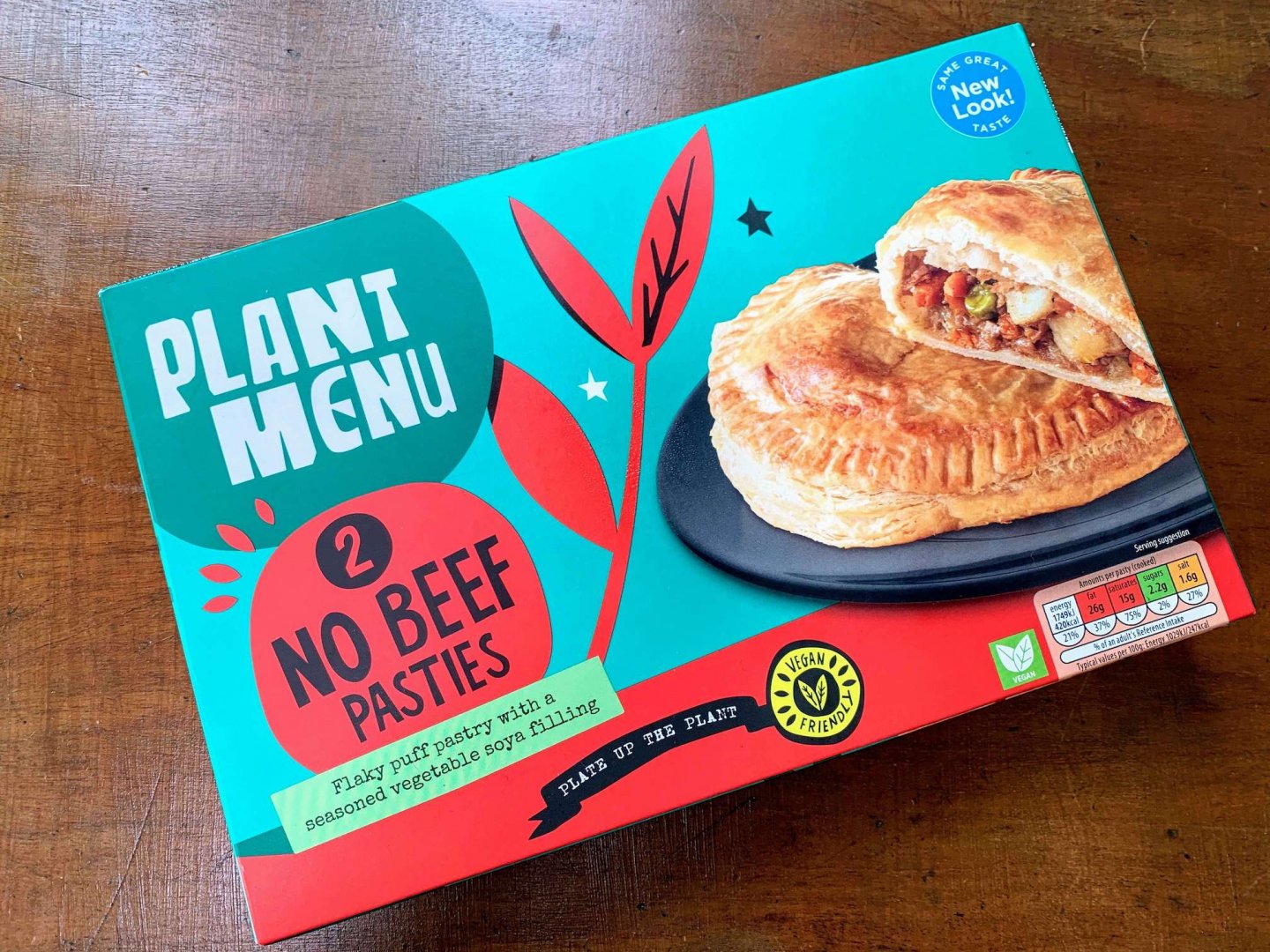 Today I am trying out and reviewing Aldi Plant Menu No Beef Pasties. Will it stand-up to a regular pasty? Let’s see!

Many supermarkets these days have an extensive Plant Based Ready Meals section and my local Aldi is dedicating more of its shelf space to ‘non meat’ products.

The packaging is indicating that it’s had a re-design, probably to bring it in line with the rest of the Plant Menu range. The tagline for this product is ‘Plate up the Plant’. This pasty looks nothing like a plant and of course it carries the ‘Vegan Friendly’ badge.

Looking at the product on the packaging, it looks like any other pasty, but without the meat. Lovely looking pastry – the packaging promises ‘Flaky Puff Pastry with a Seasoned Vegetable Soya Filling’.

Incidentally I was baking earlier in the year and I was trying to buy all butter puff pastry. It’s very difficult to find and after a little investigation (browsing my supermarkets online shopping portal) most of the ready made puff pastry options are Vegan Friendly.

So back to this product….the pastry looks good. The filling looks like the filling to most pasties, so I’m looking forward to my pasty!

The pasty looks like any other frozen pasty – no surprises there! Normally you’d glaze the pastry with egg wash or milk, so I checked the packaging for the Vegan or Plan based alternative. Much to my disappointment there was no stipulation for glazing the top – I thought I was going to learn a trick to do with Plant Based cooking.

The packaging states the cooking time is 30-35 minutes, but I decided to set my timer for 25 minutes and gauge how much longer it would need in the oven. At the 25 minute mark they looked almost done, so I added another 3 minutes making the cooking time a total of 28 minutes.

I cooked both pasties, and while they did puff, they did so very unevenly and I was concerned that they were undercooked. On closer inspection neither pasty had a soggy bottom, only a cooked through and golden brown bottom.

Before serving, I decided to cut one of the pasties in half to see the filling and what struck me immediately was the peppery smell that really hit me in the nose. Even though my pasties didn’t look as pretty as the ones on the packaging, they look golden and they smell good.

There certainly seemed to be plenty of filling. It looks moist and there are carrots, what I think is swede and of course the Soya, but what seems to be missing are the peas. I love peas so I’m disappointed that I didn’t find a single pea, and neither did my lunch companion who had the other pasty.

As with my initial findings when I cut open the pasty, the first thing that I find is an overpowering peppery flavour. Having had a ‘regular’ pasty, I can appreciate that they are well seasoned, but the pepper just took over. It was so strong that I could’t taste anything other than pepper. Eventually the swede flavour came through and to be honest I didn’t get any flavour from the Soya, only texture.

The pastry (which I’m reminded was Vegan Friendly) indeed was flaky, crisp, light and dare I say buttery, but as I mentioned before, most ready made puff pastry on the market is Vegan Friendly so it wasn’t a great surprise.

Containing considerably less saturated fat than its ‘regular’ cousin, it’s still 429 calories per pasty (only 149 calories less than the regular) and I’m left feeling hungry. It would be tempting to serve some chips alongside, but that would make for quite a high calorie meal which isn’t very filling.

Taste : 2 out of 5 – this is for the pastry alone. The filling was way too peppery and where were the peas the packaging promised? The photography of the food on the package is supposed to be indicative of the product within and this missed the mark for me.

Value for money : 2 out of 5 – it seemed brief and really didn’t touch the sides.

Likelihood of buying it again : 0 out of 5 – the pastry was the best bit and I paid for a pasty not just pastry!

Where To Buy It

You can find this No Beef Pasty most Aldi stores. for just £1.19.

Please note that this review is based on the product that I’ve purchased and the review reflects my own honest opinion.