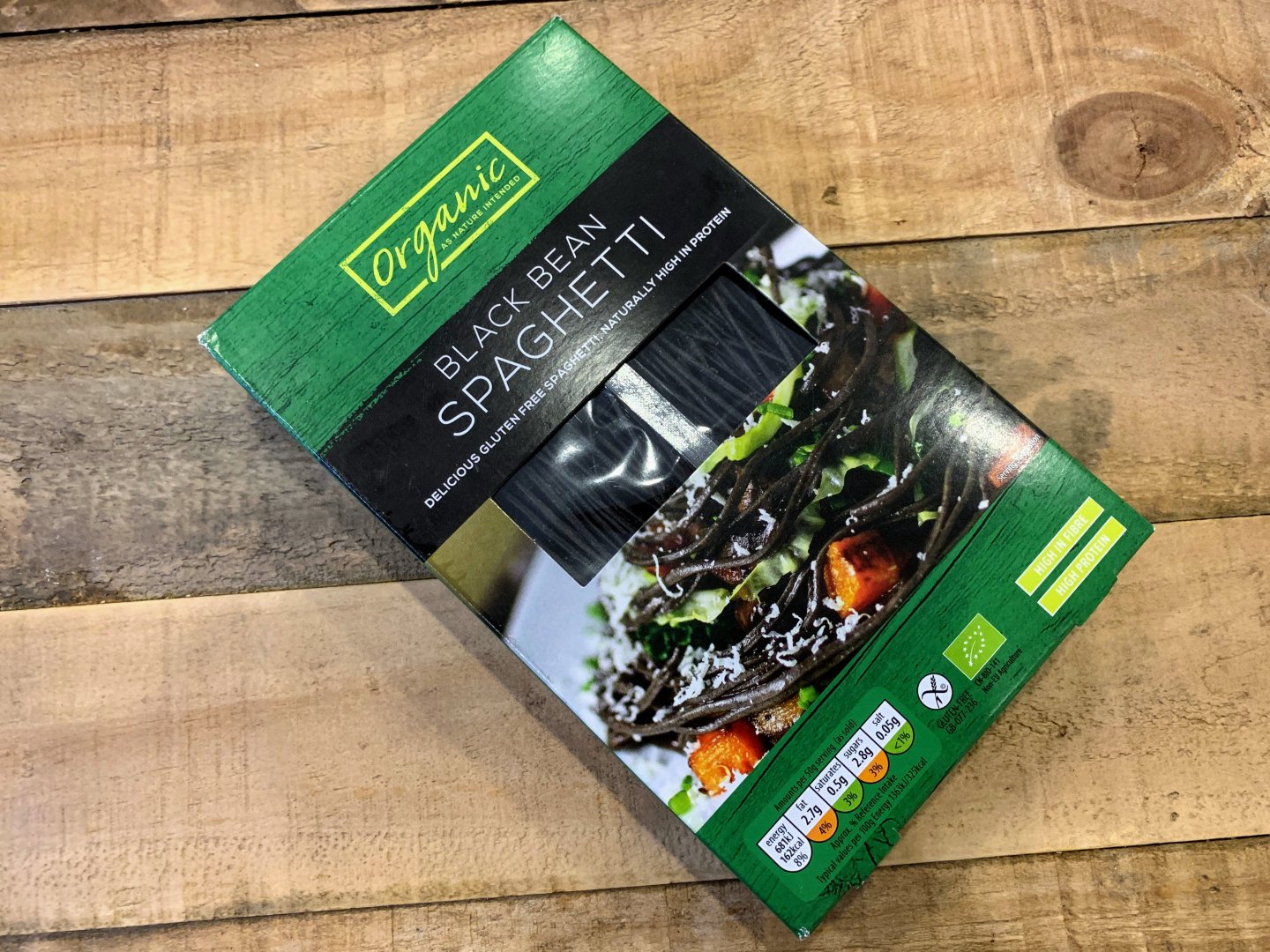 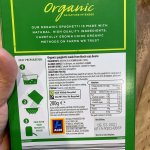 I’m Italian so I’m no stranger to pasta as you can probably imagine.  Over the years I’ve tried many different brands, fresh and dried.  When wholewheat pasta first came onto the market I’ll readily admit that I wasn’t a fan, but recently I tried it again and it was much much better.

In recent years many gluten free varieties have come onto the market.  Because of their ‘gluten free’ credentials some such products seem to command a much higher cost and for me they are so far removed from what I know the texture and flavour of pasta to be that I would rather not waste my money but I can appreciate a need for them.

Out shopping recently, a packet of black spaghetti caught my eye.  Initially I thought it was squid ink pasta and I was about to declare how much I dislike squid ink pasta and how I can’t eat it when I noticed that this black spaghetti was made from black beans.  Further intrigued the packaging pointed out that the product was organic, gluten free, high in protein, high in fibre, suitable for vegetarians and vegans alike.

I’m going to admit that I didn’t have much hope for this product.  I was expecting my experience of this product to go the same way as when I’ve tried other products.  I wanted to experience to be the best it could be so I carefully considered my topping choice for this dish and I chose to make my Pasta Broccoli recipe to keep the dish plant based.  The bright green broccoli and fresh red tomato sauce sitting on top of the black spaghetti strands was going to be quite a challenge to the eye, but one I was totally up for!

On first glance the cooking instructions were much shorter than regular pasta made from Durham wheat.  This package indicated a cooking time of 4-6 minutes and I prepared my cooking water as I 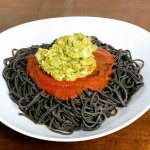 would for any other pasta.  A pan filled with boiling water and salted.  With my sauce and sautéed broccoli standing by, in went the spaghetti.

After a minute the spaghetti started to change colour.  No longer a vibrant black, it changed to more of a charcoal colour.  I have to admit this wasn’t as appealing.  No-one likes grey food (I really don’t understand this trend for charcoal laced food, perhaps I will some day).  I kept a close eye on the spaghetti and ultimately I drained it after only 4 minutes so it still had an al dente texture to it.

Going in with an open mind as well as an open mouth, I really enjoyed the spaghetti.  Having the sauce topping meant that I could taste the spaghetti strands on their own and they has a really nice texture with a little bite.  The strands aren’t smooth like ‘regular’ spaghetti so they clung on to the sauce and broccoli topping really well.

The pack was £1.99 for a 200g which is more expensive than I would normally pay for regular spaghetti, but if you’re looking for an alternative then I’d happily recommend this.

Likelihood of buying it again : 4 out of 5

I am an MNU Certified Nutritionist and offer group coaching as well as personalised services.

My app has over 330 of my recipes with calories, macros,automatic adjusting of recipe ingredients to meet calorie goals, shopping list generation and much more.

Learn More About The App

The first app of its kind to deliver a virtual pacer and trainer into your pocket and is even compatible with Strava.

Run Faster – Use the virtual pacer to reach your goals.
Run Longer – Set the pacer to your perfect long distance speed to build endurance.
Get Stronger – Use the tempo & interval modes to nail your training plans.